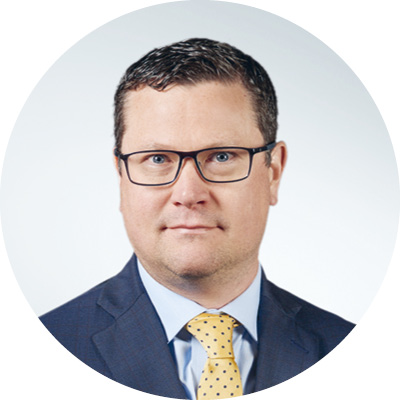 The auto industry is in flux, with automakers and suppliers alike concentrating resources on multiple disruptive trends, like digitalization, electrification, and autonomous driving. With such focused attention on future technology, we risk overlooking smaller, evolutionary innovations that can make today’s vehicles safer and more enjoyable. Gentex’s strategy is to cultivate emerging technologies that address the industry’s macro trends while also acting as innovation platforms for today’s vehicles. In short, we look to introduce features for today based on tomorrow’s emerging technology paths.

Gentex is a technology company and long-time supplier of electro-optical products for the global automotive, aerospace and fire protection industries. We supply nearly every major automaker with connected-car technologies and advanced electronic features that optimize driver vision and enhance driving safety.

Gentex is a technology company and long-time supplier of electro-optical products for the global automotive, aerospace and fire protection industries. We supply nearly every major automaker with connected-car technologies and advanced electronic features that optimize driver vision and enhance driving safety.

Intentional Innovation
Since our inception, Gentex has managed the evolution of automotive rear vision. We use the rearview mirror (and surrounding windscreen) as a strategic electronic module – a delivery mechanism that helps automakers deliver sophisticated, revenue-producing electronic features to the car.

Our mirrors can automatically eliminate headlight glare, adjust your thermostat, pay your tolls, record video in case of an accident, scan your iris, monitor driver alertness, and much more. If fact, over the years, we’ve integrated over 100 different features in and around the mirror, including cameras, microphones, displays, telematics components, alerts, transaction modules, car-to-home automation systems, security components, ADAS features, and interior lighting.

Digitalization
To further address the industry’s digitalization trend, we’re currently helping automakers transition from an analog to digital rear view by using cameras and displays to augment traditional rearview mirrors. Central to digital vision is our Full Display Mirror (FDM), an intelligent rear-vision system that uses a custom camera and mirror-integrated video display to optimize a vehicle’s rearward view. The system captures video from a rearward-facing camera and streams it to a unique mirror-integrated LCD that provides the driver with an unobstructed, panoramic view behind the vehicle. The feature is currently available on more than 60 vehicles from 15 different automakers around the world.

Today, we continue to improve the FDM’s functionality with additional features. Gentex’s FDM is central to our camera monitoring systems (CMS), which use three cameras to provide comprehensive views of the sides and rear of the vehicle. Gentex is also developing hybrid camera monitoring systems, which integrate the side-view cameras into the vehicle’s exterior mirrors, and fully digital CMS, which replaces exterior mirrors with side-view camera pods and curved interior OLED displays.

Our FDM is also evolving to incorporate a touchscreen that allows the driver to adjust the display’s view with the touch of a finger. We also recently introduced a mirror-integrated digital video recorder (DVR), or dash cam, which is designed to capture road scenes, accidents, vandalism, and other traffic events.

Autonomous Vehicles
To address the coming autonomous age, Gentex is advancing several of its core competencies, including dimmable glass. We’re currently working on large-area dimmable devices that will one day allow us to envelop an autonomous vehicle with dimmable smart glass, providing passengers with unprecedented views and on-demand privacy.

Toward that end, we recently completed the construction of a new, 20,000-square-foot assembly area for the manufacture of large-area dimmable glass, which will allow us to supply large-area dimmable devices in volume. As a vertically integrated supplier, Gentex’s operations include everything from the coating, bending, and cutting of glass to the development of dimming control algorithms and related electronics manufacturing.

But as our development work in this area continues, we see numerous opportunities for interim dimmable glass products that can be commercialized on today’s vehicles. For instance, we’re currently working with various customers on large-area dimmable devices for in-vehicle lighting, sunload, and privacy control, including dimmable sunroofs, which darken on demand or in conjunction with system intelligence.

In addition, we also recently introduced a new dimmable sun visor concept that folds down like a traditional visor but includes a clear, dimmable panel that can darken on demand or in conjunction with sunload sensors.

In-Cabin Monitoring
Monitoring the driver and vehicle occupants will also become increasingly important as we move through the various levels of driving automation. In-cabin monitoring will be especially critical for keeping passengers safe and comfortable in the autonomous age. For decades, Gentex has designed and manufactured automotive-grade cameras engineered for precise applications, integrating millions into vehicles every year. To support the growth of in-vehicle sensing, Gentex is developing camera-based sensing units capable of monitoring drivers and passengers alike.

This past September, Gentex announced the acquisition of Israel-based Guardian Optical Technologies, which developed an infrared-sensitive, high-resolution camera combining machine vision, depth perception, and micro-vibration detection. This proprietary sensor configuration allows the system to not only monitor the driver, but also the entire vehicle cabin and all its objects and occupants, assessing their behavior, gestures, and activities.

The system monitors the driver’s head pose, eye gaze, and other vision-based metrics to determine driver distraction, drowsiness, and readiness for return of manual control in semi-autonomous vehicles. It can also track passengers and their behavior, as well as objects and other environmental factors.

The system is completely scalable, allowing automakers to quickly implement core driver monitoring features on today’s vehicles to meet evolving NCAP requirements. It also can turn today’s vehicle into a mobile communications center, with the system’s mirror-integrated camera perfect for making a video phone call, conducting a meeting, or capturing an in-cabin selfie.

Gentex annual ships more than 40 million dimmable devices to customers around the world. 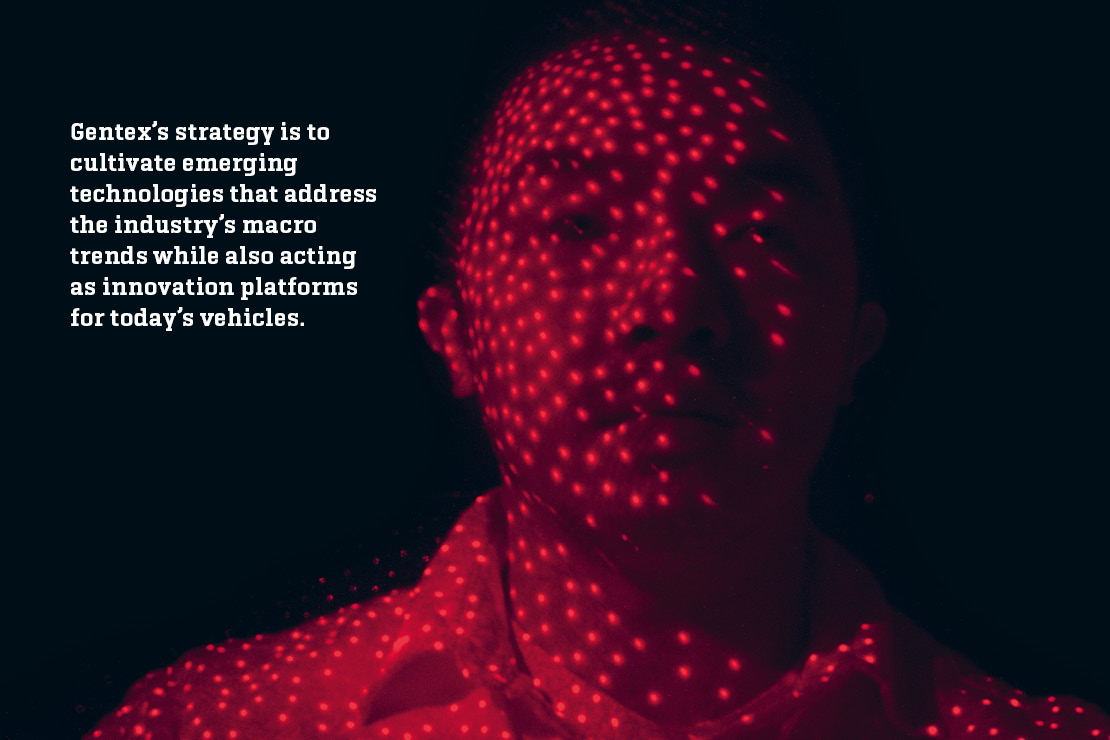 Particulate Sensing
Another Gentex core competency critical to the coming autonomous age is sensing, or machine olfaction, which provides the vehicle with a digital sense of smell. We’re currently developing digital olfaction technologies that can detect a wide range of airborne contaminants in order to help autonomous vehicle fleet operators protect riders while continually monitoring the vehicle’s air quality.

Gentex’s growing sensing capabilities stem from our experience in fire protection, an industry in which we’ve operated for nearly 50 years. We introduced the world’s first dual-sensor photoelectric smoke detector, a device less prone to false alarms yet quick to detect slow, smoldering fires. Today, millions of Gentex smoke detectors and signaling devices can be found in hospitals, hotels, office buildings and other commercial properties around the world.

Gentex is currently working with robotaxi manufacturer ZOOX to introduce the first smoke detector designed to detect smoke and vape within the vehicle environment. Our system places a photoelectric sensing unit within the vehicle’s ductwork to continually sample air quality. If smoke or vape is detected, the vehicle operator could be notified, the vehicle flagged for cleaning, and the offending passenger assessed a fine. 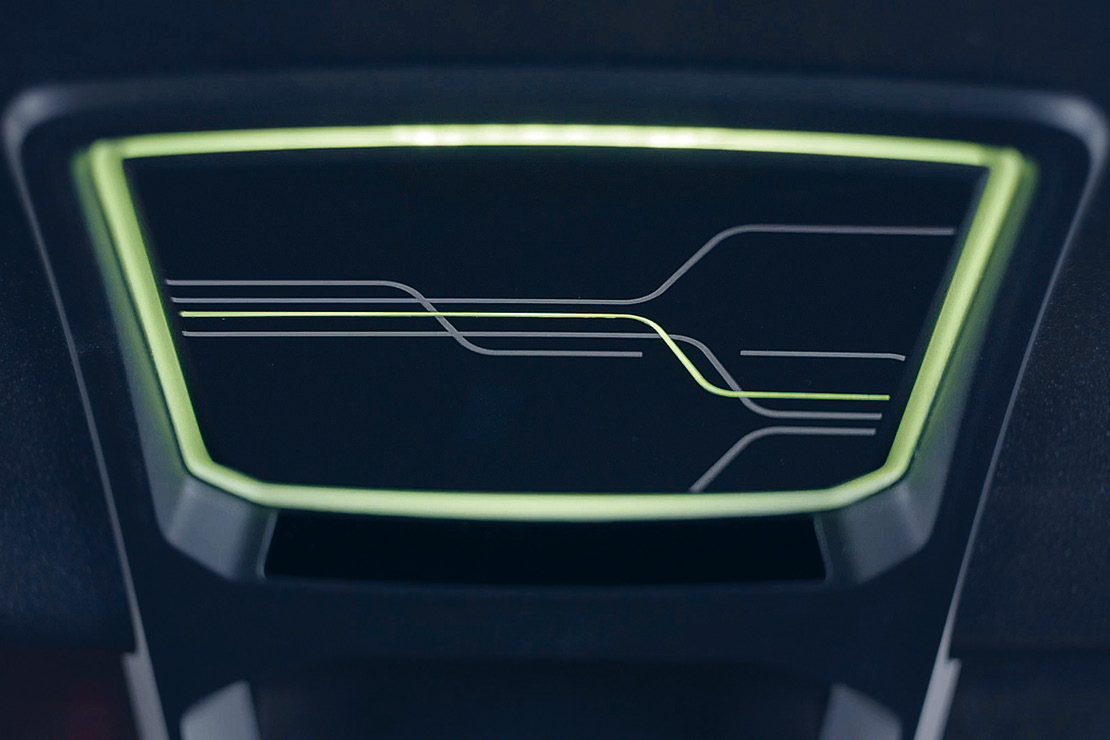 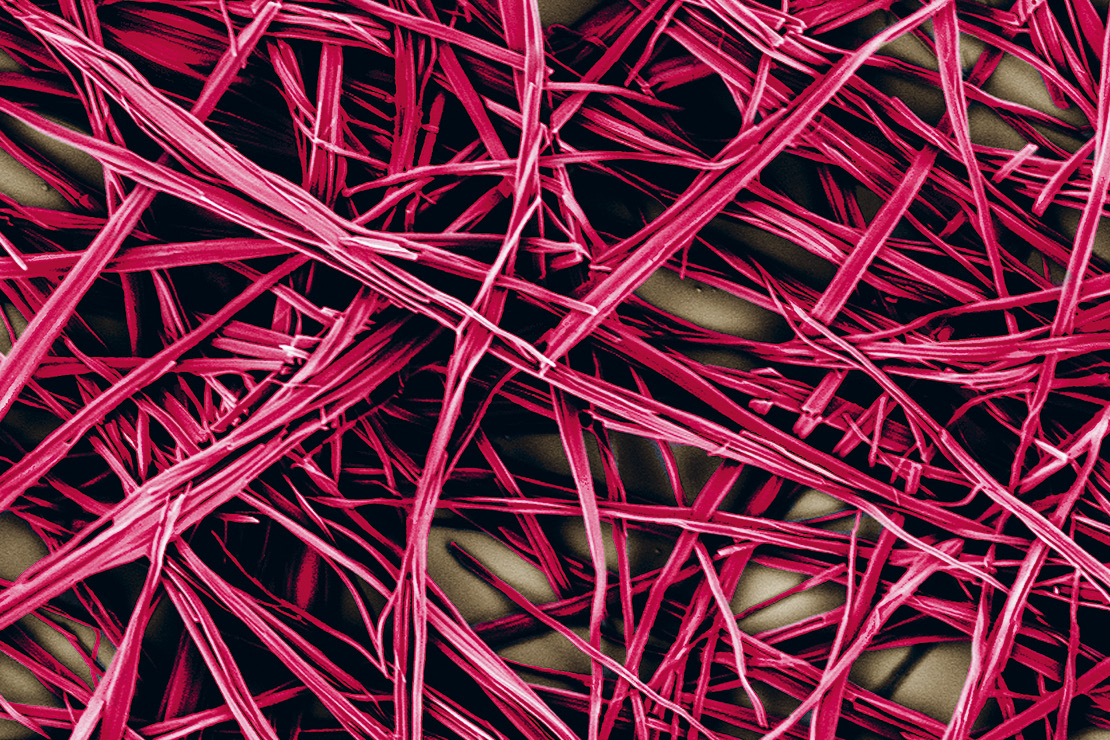 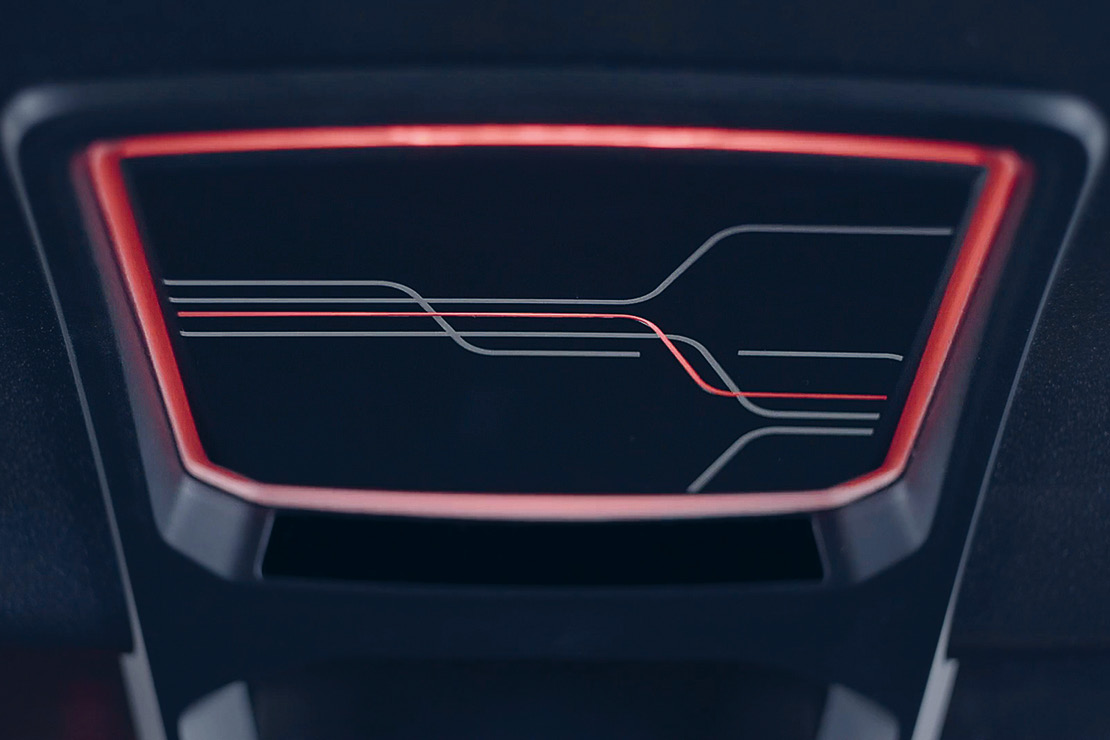 Chemical Sensing
In January of 2021, Gentex announced the acquisition of a new nanofiber sensing technology capable of detecting a wide variety of chemicals, including explosives, drugs, VOCs, toxic industrial chemicals, amines, and more. The technology and patents were included in the 2020 acquisition of Vaporsens, a unique startup founded by professor Dr. Ling Zang at the University of Utah (Utah, Nevada, USA).

The core of Vaporsens’ chemical sensor technology is a net of nanofibers approximately one thousand times smaller in size than human hair. Their porous structure allows them to absorb targeted molecules from sampled gas and identify them via changes in their electrical resistance. The technology allows for the rapid detection of target chemicals with high sensitivity in the parts per billion and parts per trillion ranges.

Gentex is currently developing prototype overhead-console-mounted units that would contain both particulate and nanofiber-based chemical sensors to identify air impurities. The units would continually circulate air through sampling chambers to identify smoke, vape, and a myriad of target chemicals.

Chemical detection will be critical to passenger safety and the ongoing maintenance of autonomous fleets. In-vehicle chemical detection could continually sample autonomous vehicle air quality to help identify explosives or incendiary components, biohazards, illicit drugs such as marijuana and Fentanyl, and pollutants such as ammonia and other VOCs.

By accurately detecting target chemicals in the autonomous environment, vehicle operators could recall vehicles for sterilization, respond to passenger medical emergencies, alert authorities to potential nefarious activities, and much more. When fused with other cabin monitoring components, chemical detection could serve as algorithmic input to confirm in-vehicle activities observed by cameras and other sensors. Simply put, digital olfaction can help keep passengers safe and vehicles in peak operating condition.

In the near term, chemical detection systems may also become integral vehicle components in today’s passenger vehicles, as countries such as China consider mandatory in-vehicle air quality regulations. Regulators are contemplating requiring vehicles to test the levels of contaminants such as formaldehyde, benzene, and even electromagnetic radiation levels.

Gentex’s strategy is to cultivate emerging technologies that address the industry’s macro trends while also acting as innovation platforms for today’s vehicles.

Gentex’s goal is to provide automakers with holistic cabin monitoring solutions, from simple driver monitoring through complete cabin monitoring and machine olfaction. We’re engineering a comprehensive and scalable platform based on robust sensor fusion techniques that will allow us to provide features for today’s vehicles as well as transitionary and completely autonomous vehicles.

These are just some of the ways Gentex is attempting to address the larger trends affecting our industry while simultaneously bringing to market the interim innovations that can make today’s vehicles safer and more enjoyable. By advancing some of our key core competencies, we look to continually innovate features for today based on tomorrow’s emerging technology paths.