Extreme acceleration, dynamism, complete and utter absorption in the moment – everything I’m passionate about, I see today in the cloudy grey skies of Tarifa and Liam Whaley’s mega loops. Not to mention in the grey-blue Porsche Taycan Cross Turismo that I drove here to the dunes of Spain’s kitesurfing hot spot … And I’m in for many more thrilling moments to remember.

The door closes with a sonorous thunk; I have the curved display in front of me; next to it I can see more displays; my hands on the sport steering wheel, the start button … I’ve driven electric vehicles quite a lot, of course, but no other all-electric car promises: Soul, electrified. So I’m curious. I have a wonderful driving route ahead of me from Marbella to Tarifa. It’s a good 100 kilometres – and along the coast, naturally. My Taycan Cross Turismo glides along, the morning sun glinting faintly through the fast-moving clouds. It’s winter in Spain – a season with a special atmosphere. The coastal road speaks to the soul of my Taycan, and my drive becomes a highly-charged balance between performance and concentration.

Big air
I don’t see any tourists in Tarifa – just young people who all have the same thing on their minds. Just like my host and pro for the coming days, Liam Whaley. I meet him at the appointed place, but he isn’t one for small talk. He just jumps into his Cayenne E-Hybrid and we set off straight away to the beach.

Always with the horizon and the sea in view, we engage Gravel Mode to drive among the dunes – and over them. Then we stop and I see a colourful spectacle of kitesurfers dancing over the waves like drifting confetti. I am immediately fascinated by the speed, athleticism and elegance of this sport.

Then I get out of the car. Bam! The wind almost blows the door out of my hand. Just a moment ago, I had only the whirring of the electric drive in my ears and the quiet, colourful play on the waves before my eyes. Now the wind is hitting me in the face; I can feel the salt water on my lips. »40 knots, so about 90 km/h!« laughs Liam.

For a first conversation we look for a somewhat quieter spot, if you can call it that, given that we find ourselves among some shifting sand dunes. The sprinkling sand holds an enormous fascination for us, sucking us in as it were, and we lark about like a couple of kids.

Kitesurfing is a safe place for me. It’s a place where I can slide my energy, where I can best express myself.

Welcome to the world of Whaley
His blond curls don’t exactly advertise the fact, but Liam is Spanish. At first, you might think »well, being born in Tarifa, you see the kites all day long, the kid tries it and has talent …«

But no. His parents were »globetrotters« who didn’t want to be stuck in a nine-to-five job. But they weren’t globetrotters with a van and folding table. Well, maybe they were, but they were savvy businesspeople too. In many beautiful hotspots around the world they bought or built property, a house or a hotel. Including in Tarifa.

But Liam was born with kitesurfing in his blood, because his father is a fan too. Together they have visited Brazil, and the most beautiful kitesurfing spots. When Liam was 13 years old, the family moved to Tarifa, the wind capital of Europe, because here they found the optimal training conditions for their budding kitesurfing star. In Tarifa, Liam started training professionally.

A super talent and golden boy
At the age of 15 he had participated six times in the PKRA, the Kite World Tour, and had achieved impressive results, placing seventh and fourth in different events. It was a spectacular experience for a 15-year-old with wanderlust in his genes: exploring the world and doing what gives you the most pleasure.

He casually mentions that he was ranked fourth in the world by the age of 16. Wow! My mind turns to what I had achieved at the same age. I was reasonably successful with my handball team back home in Münsterland, but that’s not exactly in the same league.

We’re sitting on the beach, looking out to sea. Like two people putting the world to rights. Except that one of them was the world champion in freestyle kitesurfing at the age of 18. Not that you’d know: Liam talks with such modesty and understatement, as if his was no more interesting than any other profession.

He is a golden boy in the best sense of the word: charming, cheerful and incredibly likeable. It’s mainly his sense of fun that comes through, along with a sense of gratitude for having been born into this life and that his parents support him.

It’s only occasionally that a spark of ambition flashes in his eyes when he talks about competitions. In interviews he always sounds composed: if it wasn’t enough this time, it will be next time.

Driven by passion
Of course Whaley is like any exceptional athlete. He competes to win, he always gives his best, and if that’s not enough, he’s disappointed and trains even harder for the next time. Because that’s the only way to make it in sport, to be a world champion – and to be chosen to give a testimonial for Porsche.

As Robert Ader, Chief Marketing Officer (CMO) of Porsche AG said to me in a preliminary conversation before my trip to Tarifa: »Kitesurfing is about athleticism, precision and pushing boundaries, which makes the sport a perfect fit for Porsche.« That’s exactly how it is, and that’s what drives Liam every day: »My goal is to push kitesurfing to the next level. Every day.«

But now it’s my turn to experience the exhilaration of this extreme sport first hand. I’ve gained a reputation for liking a challenge and heading into the eye of the storm – almost literally in this case. So I get into my wetsuit and, after some brief instructions, we head into the water.

Alas, the final day of our trip is here and Liam tells me something about his recent competitions after a weight-training session.

My partnership with Porsche will give me the opportunity to transform my dreams into reality. I cannot wait to challenge myself and take everything to the next level. 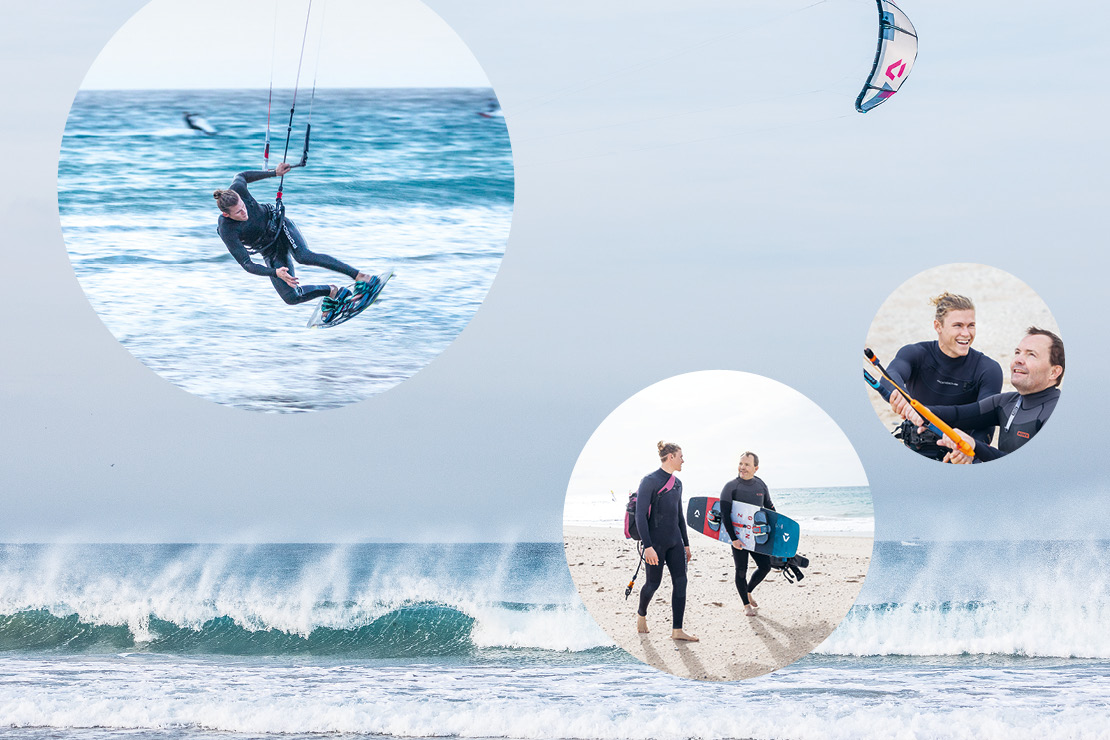 King of the Air
He has just come back from Cape Town and the Red Bull King of the Air event, which was supported by Porsche for the first time this year, along with Liam.

Participating athletes compete by performing extreme jumps of 20 metres height or more. The kitesurfer crowned Red Bull King of the Air is the one who, on the day, outpaces the field in terms of height, power, extremeness, technique and innovation.

Liam has been a top contender for the past few years. His performance wasn’t quite enough for the top title this year, but he took the »Mystic Move of the Day« award for the best trick of the day with a front roll kite loop board-off.

Good vibes only!
For the final pictures of the day, Liam gets on the board in the water one more time. I’m still in explore mode myself, and want to push my boundaries. So I quickly take off my shoes and get on a small rock that Liam will be passing. He comes shooting towards me in the water, takes off and … »High-five!« In a wild loop he slaps my hand!

Now I’m the King of the Day and, with this crowning experience forever etched in my memory, I can bid farewell to the wind capital of the world in my Taycan.

My trip may be over but I’m sure the sport will continue to intrigue me. Next time I’ll come with more time in hand and I’ve already booked a course at Liam’s new kite school: opening soon and impossible to miss, right next to the world-famous Tumbao Bar.

My goal is to push kitesurfing to the next level. Every day.